We live in a world that, in part, is very social media driven.  If a picture or status doesn’t receive enough likes or shares we feel, at some level, less accomplished.  This is why we post status’ right? We want to share what we are doing and in turn receive a response back.

This infatuation with social media and the likes/shares seems to only be getting worse the younger the demographic you survey.  There have recently been studies completed that show a correlation between the numbers of likes received on a status or picture and one’s perception of self-worth.

I know that this is at least in part true by speaking to my daughter.  Hailey is 10 and even though she has no social media accounts asks about how many likes photos she is in receives.  Part of this is my fault as I’m sure as I likely have said something about likes or comments not even thinking about it.  However, the other influences in her life are her friends.  Some of them, even at 10, have social media accounts that they speak about and are active on.

I am just as guilty as posting as anyone else. So when I was bored yesterday while out running errands I told Christina that we were going on a vacation.  Not a real vacation, but a fake facebook vacation.  Here’s the short of it.  I checked into the closest airport on facebook (which you don’t even have to be close to btw), tagged her as with me and used the clever status of “Vacation #2!!!!!!!!” 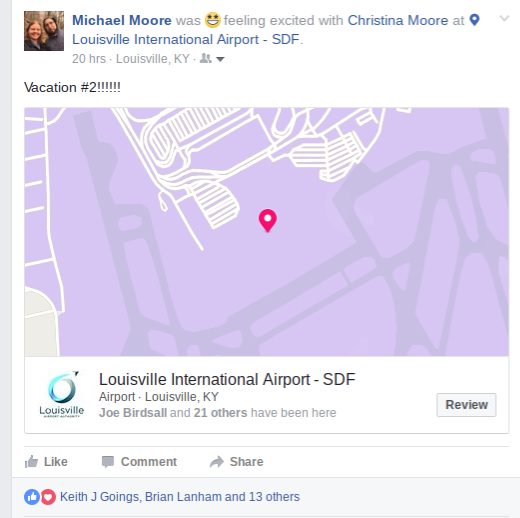 Not long after I started getting comments, likes and texts.  Yes, text messages.  When you don’t let people know you’re flying somewhere they get concerned.

It started as a joke but after seeing the reaction I decided I would see how far I could go with people still on board with the idea that I was somewhere I wasn’t.  I decided to keep checking in at stops along the way.  So I decided to stop to eat at the airport, but who would believe I was eating if I didn’t include a picture.  A quick google search solved that problem. 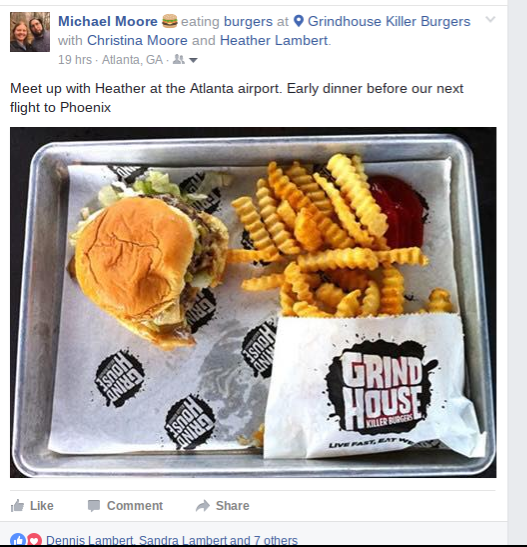 At this point my sister-in-law Heather had texted Christina and asked where we were going.  Christina had told her that I was an idiot and decided to take her on a fake vacation.  Heather decided she wanted to go too.

The more the merrier.

After what I can only imagine was a great burger at the Atlanta Airport Heather, Chistina and I were off to Phinox Arizona. 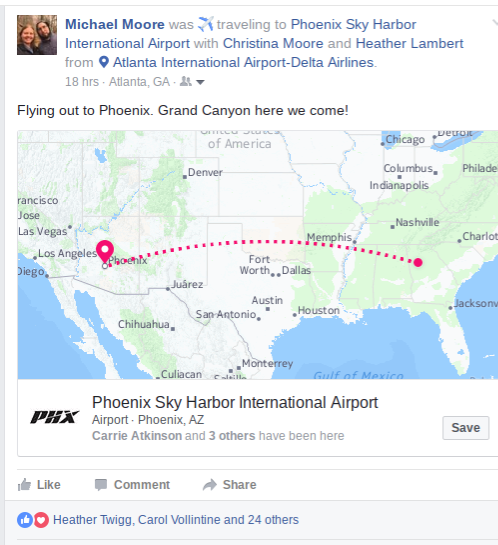 A quick search of Instagram for #GrandCanyon give me a beautiful shot of what my fake vacation self would have taken and posted. 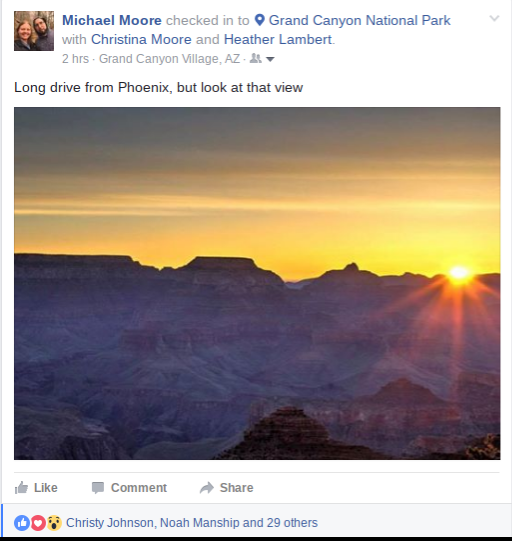 The point is this, social media is 99.9% pointless.  We either overshare with the world (i.e. Update our status when we are doing our laundry), share only the highly edited and filtered views of our life or we upload selfies from every possible angle in hopes one of those will turn out.

Or in my case punk all your friends on Facebook into believing (or at least wondering) if you had left the state.  Full discloser, I was doing laundry and cleaning my house.  Not quite as awesome as going to the grand canyon.

I’m all for social media and I will continue to use it.  However, we all need to be careful that we don’t get so invested in other peoples lives we forget what we have in ours.  We need to take in all the everyday moments and not try to capture everything just to post it.

Now put away the computer and put down the phone, enjoy the moments!

Love it? Hate it? Tell Others:

I am a follower of Christ, a husband, a daddy and a speaker. View all posts by M.M